The Franciscan School June 20, 2022 No Comments

The middle school years can often be the most formative and impactful years in a young person’s life. During those years, kids often try new things, explore interests, and learn about who they want to be. For alumni Chris Sperrazza–who came to TFS during his middle school years–the school provided a very special and memorable time of his life. “The TFS community allowed me to thrive and be myself. It’s where I found who I really was.” 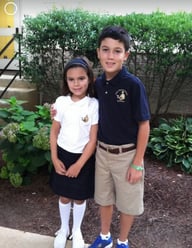 While attending TFS, Sperrazza began to develop his love for the game of golf. For ten years, golf has been a large part of Sperrazza’s life and helped him form lifelong friendships. He went on to play golf at Cardinal Gibbons High School and received a scholarship to play golf in college at East Carolina University (ECU). While at Cardinal Gibbons, Sperrazza was named to the 2018 News & Observer All-Metro Boys Golf Team. He was a four-time all-conference selection and qualified for the 2016 high school state championships as an individual. Sperrazza led Cardinal Gibbons to a third-place finish at the 2019 North Carolina high school 4A state championships after winning the 4A Mid-East Regional. And during his freshman and sophomore seasons, Cardinal Gibbons won back-to-back conference titles.

Now going into his senior year at ECU, Sperrazza has continued to play on the golf team. As a sophomore, he made the American Athletic Conference All-Academic team. At the ECU Intercollegiate this past March, Sperrazza helped his team place 3rd out of 12 teams. After graduation with a degree in Communications, Sperrazza plans to pursue a career in real estate development. He says, “The communication and skills I developed at TFS will carry me far in life!”

Like many middle schoolers at TFS, Sperrazza shares that the Washington, D.C. field trip was one of the most fun times he had at the school. He also played on the baseball team all three years, winning the championship his 6th grade year. Sperrazza enjoyed representing TFS on his team.

Sperrazza wants to share with students now to “not take your time at TFS for granted because it goes fast. Having the opportunity to learn and share my faith with my friends was something special.”