The Franciscan School July 16, 2021 No Comments

The three core values of The Franciscan School - Faith, Academics, and Service - are woven
into the daily lives of students, instilling lifelong skills that help set them up for a future of
success. After 21 years of operation, TFS has seen the return of this investment by watching
alumni make their marks on the world. For Dylan Spitz, who graduated TFS in 2012 and attended all 9 years, it was the academic excellence, moral compass, and service for others that have helped mold him into the pilot he is today.

Spitz also comes from a big family: he’s the oldest of 6, all who have attended TFS. In
fact, his youngest sibling just graduated in June. For his family, TFS has been an instrumental
part of their lives for the last 19 years. Principal Mike Watson said “Dylan set the stage for his
sisters and brother. Dylan, as well as his siblings, personified the hard work and wide-spread
involvement in all aspects of life at TFS.” 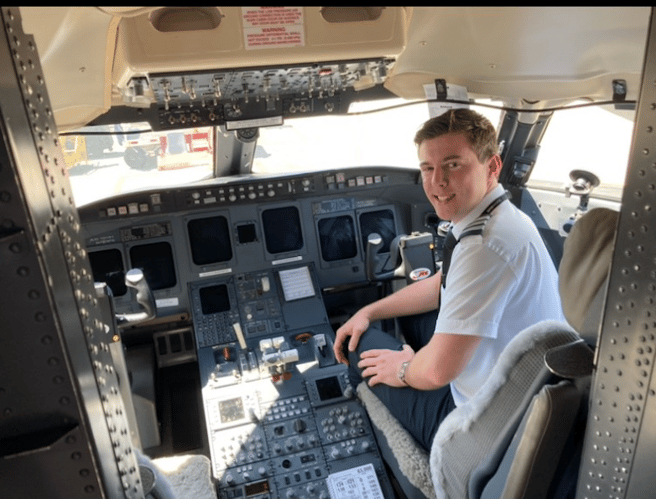 After Spitz graduated from TFS, he attended Leesville Road High School where he signed up
for an aerospace class his first semester, not really sure what he was getting into. “At first, I
didn’t like it. But by the second semester, I was really enjoying it and knew I wanted to make it
my career.” Spitz moved quickly: by age 16, he started taking flying lessons, and by the age of
17, he had already obtained his initial private pilot license.

Not long after, Spitz attended Embry-Riddle Aeronautical University in Daytona Beach, Florida
where he received his Bachelor’s Degree in Aeronautical Science. He continued to work at the
University as a flight instructor to get the air time he needed to fly commercially. And just a few
months ago, Spitz began as a First Officer in Training at PSA Airlines where he pilots regional
flights around the country. He gets to travel to new cities, sometimes having just enough time to
explore. But Spitz said his favorite aspect of the new job is learning: “What I enjoy most about
my job is that it’s a challenge- learning how to fly different planes; some are smaller, and some
are much larger.”

During his time at Leesville Road HS and Embry-Riddle, Spitz said he was more than prepared
for the rigor of classes he took, which he accredited to the skills he gained at TFS. “TFS
prepared me to be a good student, helping me to succeed in high school and while studying to
be a pilot,” said Spitz. Principal Watson shared that Spitz’s “success academically, and now
professionally, is not a surprise to those who know him. He is driven and ultimately met his goal
of becoming a pilot early on. We are all proud of his accomplishments and know he will continue
to be successful".

But Spitz also believes that TFS prepared him for more. He said the school instilled a moral
compass for him, the understanding of moral ethics and work ethics. He also remembers the
importance of serving others, like the times they volunteered at homeless shelters, donated
food, and participated in service projects. Spitz recalls the family duo of teachers - Mr. and Mrs.
Stevens (mother and son) - “who were always putting on service events for the community.”

Spitz, like many graduates, says his time at TFS went too fast. “Take advantage of your time at
TFS and all the opportunities provided because they will pay off,” Spitz said. “And enjoy your
time there, it truly goes too fast.”