The Franciscan School January 14, 2023 No Comments

Arranging and attending funerals can often be one of the hardest times in a person’s life. When TFS alumni Alex Kozak was young, her grandfather passed away and she was heartbroken. While working with the funeral on arrangements, the funeral director’s kindness made an impression on Kozak. She knew she wanted to help families in the way their funeral director helped her family.

Kozak, who graduated from TFS in 2005, is now a funeral director for Service Corporation International, which has locations at Mitchell Funeral Home at Raleigh Memorial Park, Brown-Wynne Funeral Homes, and Apex Funeral Home. After she graduated from TFS, she attended Cardinal Gibbons High School and William Peace University. Most recently, Kozak graduated from Fayetteville Technical Community College and majored in Funeral Service. 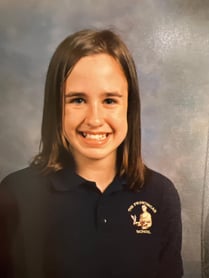 Kozak set the wheels in motion for her funeral services career while she was in college. During that time, she was hired as a funeral apprentice and remained in that role until she obtained her Funeral Directing License in 2016. She then became a funeral director for Bright Funeral Home, and now for Service Corporation International where she directs funerals at three locations. “My favorite part of my job is helping families through a difficult time,” shares Kozak. Being able to meet people in a challenging place and make it a little less difficult provides her the motivation she needs each day.

During her time at TFS, she fondly remembers the care and dedication of each of her teachers, in particular Mark DeLaRosa and Susan Souers. Kozak says, “I enjoyed their classes so much and will remember them for the rest of my life.” Kozak also participated in cheerleading and loved every part of her time at TFS.

Kozak notes that “If I could share wisdom with TFS students today, it would be to work hard now and in high school. It WILL pay off.” And she shares some advice to “Remember everything always works out in the end, no matter how hard the time or challenges may seem.” We are so proud that Kozak’s positivity and compassion have helped hundreds of families through end of life arrangements.