The Franciscan School July 15, 2022 No Comments

At The Franciscan School, we welcome new students into all grades. Whether at Kindergarten, in the elementary years, middle school, or even in 8th grade, students join at different times. For alumni Charlie Davis, he attended all the grades, from TFS’ preschool year through 8th grade. Davis was able to enjoy all the school had to offer, and during his time, TFS’ motto of service was deeply ingrained into his spirit. With a dream to commission into the United States Army as a 2nd Lieutenant, Davis is well on his way.

As a 2016 graduate of TFS and a 2020 graduate of Cardinal Gibbons High School, Davis is now in the Army ROTC and the Corps of Cadets at Virginia Tech. While students attend TFS, they are taught early to live The Franciscan mission through regular service projects and community involvement. Davis’ time at TFS helped instill this spirit of serving others: “I’ve always wanted to serve in some capacity, but I saw Army ROTC and the Corps of Cadets as a way to push myself to be a better person and leader.” 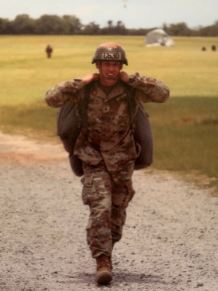 After Davis finishes his time at Virginia Tech, he plans to commission into the United States Army as a 2nd Lieutenant branching into Armor or the Logistics Corps. His goal is to serve a minimum of eight years and earn his master’s degree during that time. He also hopes to become Captain by the end of those eight years.

During his time as a TFS student, Davis credits his teachers as having a big impact on his life. He felt particularly invested in by former 8th grade teachers, Mrs. Bennett and Mrs. Moser. He also ran cross country and enjoyed his time at practices, races, and with his teammates. During much of his time at TFS, Davis attended the after-school care program and fondly remembers that time playing games with friends.

Davis hopes to impart some wisdom for students while they go through TFS: “Enjoy your time in school! Apply yourself, but also take a breath and enjoy the journey.”

Thank you for your future service to our country!