The Most Magical Year 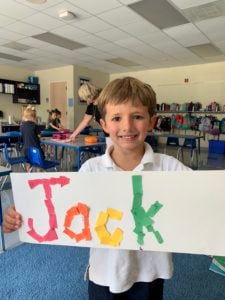 There is no debate, the most magical year is kindergarten!

I’m sure every teacher feels that the grade they teach is the best. I have a secret, Kindergarten really is the most magical year.  I spent many years as a 1st grade teacher, did a short stint in 3rd grade, I even moved into literacy coaching. Then, kind of by accident, I became a kindergarten teacher.  At first, I was not sure this was the grade level I should settle in. T here is this “look” you get when you tell people you teach kindergarten. Often, I am not sure if that look is appreciation or pity.  Either way, I am starting my 8th year as a kindergarten teacher.

Like most teachers, before school starts, I send a letter home to introduce myself and let parents know what to expect those first few days and then talk a little about the year ahead. It is almost too difficult to convey to parents this amazing journey they are about to embark on.  If they have already sent a child off to kindergarten, they can understand it immediately. If it is their first child, I hope that my letter will capture the excitement, energy, and pure magic that lies ahead.

It is almost difficult to describe the wonder seen in a child’s eye when you introduce a new concept.  Or, the look of pure joy when a student realizes they have found the correct answer. But for me, my greatest joy is found when a child learns how to read.  The first time a student figures out that by knowing those sounds, and by putting them together, they can read the words. There really is nothing better. For in that moment, I know that I have unlocked a secret that this child will take with them forever.

While it is only August, and these little ones are still trying to figure out how to walk in a line, how to tuck in their own shirts, and mostly how to open their chocolate milk without spilling it, I know what lays ahead.  I know that shortly, the magic will begin. Scribbles will become letters, those letters will become long strings of sounds, and before long, the connection will be made, and their journey will begin.

Believe me, Kindergarten really is the most magical year…