Even as a teenager, Mr. Matt Barbee, TFS 7th-grade social studies teacher, knew he wanted to teach. Barbee is in his fifth year of teaching at TFS – the first four he spent as the school’s K-8 music teacher, with a focus on band.

“The most important people in my life growing up were teachers and coaches,” Barbee says. “In middle school, an English teacher, a football coach and my private drum instructor were all very influential on me.”

Barbee was born in Ohio, but also grew up outside of Washington D.C. He freelanced and taught privately from high school through college, also working at a music store and a moving company. He received his undergraduate degree from Virginia Tech, and later went to East Carolina University to earn his master’s degree in music.

Barbee knew he wanted to eventually teach social studies after teaching a music appreciation class at the University of Mt. Olive. 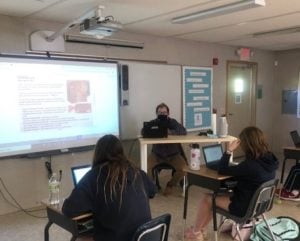 “I had been teaching at several colleges and no music class was as interesting and fun as that class where I could make cultural and historical connections,” Barbee remembers. “I enjoy connecting students with people. I emphasize to my students that the social sciences aren’t worth studying without remembering that people are the focus. People throughout history and all over the world are interconnected. In social studies, we explore those connections.”

Barbee also recognizes its understanding is critical for students today.

“Supreme Court Justices Sonia Sotomayor and Neil Gorsuch have spoken extensively together about the importance of civics for students today. I see my curriculum as helping students understand how to be ‘world citizens’ and hopefully inspire them to continue to learn more about the world,” he says. “Social studies will also help our students develop the critical thinking skills necessary to be informed citizens. The internet landscape today makes it harder than ever to distinguish information from misinformation, so these students will need to develop strong critical thinking skills to reach responsible conclusions.”

Barbee’s classes are popular with his students, mainly due to his ability to bring the content to life. “My content has a focus on Africa, Asia and Oceania from the ancient world to the present day, so it is pretty far removed from the experiences of middle schoolers,” he explains. “To engage students, I use satellite footage and 3-D models as much as possible. This allows students to explore an artifact or a location as authentically as possible. Seeing a map of trade routes isn’t as compelling as following thousands of freighters across the Mediterranean or the Red Sea in real-time.”

He also provides assignments he hopes will make lasting memories on not only his students but their families, as well. For instance, one of his assignments was for his students to prepare an African recipe at home.

“I hoped this would lead to a family dinner at home, while also exposing students to the ingredients and flavors of other places,” Barbee says. “I was glad that most students seemed to enjoy their recipes, while also seeing how many ingredients – vanilla, coffee, cacao, spices – often come from Africa and are already in our pantries. We will definitely continue to make recipes as we go around the world.”

Underscoring each lesson plan, Barbee works hard to ensure his curriculum emphasizes the use of Catholic Social Teachings, which he hopes will further his students’ understanding of how these issues have moral implications.

“As we travel throughout the world, we see resources being used irresponsibly – often at the expense of indigenous populations and the planet,” he says. “All people have rights, including the poor, the vulnerable, and those that may look and sound different from ourselves. We have a responsibility not only to be informed about the world but to act in a way to help make it a better place.”