Others Above Self: Alumni Spotlight: Jared Leins '13

The Franciscan School August 16, 2021 No Comments

“Work willingly in everything you do as if you were working for the Lord, rather than man.”
This verse in Colossians 3:23 serves as a guiding light for TFS Alumni, Jared
Leins.

Leins graduated TFS in 2013 after attending preschool through 8th grade. Leins says TFS
was instrumental in laying a solid foundation in faith, academics, and serving others: “I am
grateful for the emphasis of putting Christ and others above self.”

Leins has carried this foundation through his years following TFS. After graduating high school,
Leins attended The United States Naval Academy where he majored in Mechanical Engineering.
He is currently working in the USNA Physical Education Department to train incoming
freshmen who are participating in a boot camp called Plebe lSummer. This month, in August,
Leins will report to flight school where he will train to become a Navy pilot.

Leins admits that his first inspiration to the Naval Academy was to play baseball and get a
quality education. But since then, it has become so much more. He says, “As I progressed
through the Academy, my reason to continue changed to become a selfless leader, friend, and
future father.”

Leins’ inspiration is fitting for his career path. One of the US Navy’s unofficial mottos is “Non
sibi sed patriae,” which means “Not Self, but Country.” During his time at TFS, Leins says the
school taught him empathy and striving for a profession that puts people first. “I would not be
where I am today without the hundreds of people who have sacrificed for me in some capacity,
and I know that service will always be on the forefront of my mind for the rest of my life.” 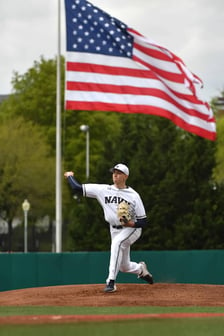 Not only was TFS foundational to his path towards service, but so was the encouragement and support of his family and the character of people he interacted with in the military. Both his
family and Naval students and officers showed traits of sacrifice and love that Leins knew he wanted to emulate. Mrs. Laureen Wacenske, School Counselor at TFS, was one of those people
who set a strong example for Leins: “She remains one of the most caring and compassionate people and teachers that I have interacted with to this day.”

One of Leins’ most treasured memories of his time at TFS was the weekly Wednesday morning Mass. He enjoyed attending church with his classmates, coming together to worship and pray.

Leins encourages students at TFS today to have an attitude of gratitude, and to remember those around you: